The Department of Health is holding an open consultation on the proposed Human Tissue Bill, with submission open till the 9th of October. Here are the details:

Government approval was received in July for the drafting of a Human Tissue Bill.
The proposed legislation will include, amongst others, provisions, on:
· Post mortem practice and procedures
· Anatomical Examination/Education & Training
· Public Display of Bodies after Death
· Organ Donation and Transplantation

The PEAI executive board is preparing a submission document outlining the potential impact of this bill on embalming practice. It is important, that you as an individual have your say about the proposed legislation also.

The ‘Opt Out System for Organ Donation’ proposed in this bill, will have an impact on post-mortem care. As it stands, only internal organs are available for harvesting. However, the bill does leave room for more organs to be added to the list. It is foreseeable that in time, human bone and skin will be included in this list, thus having a significant impact on embalming practice. However, it is important to note that this bill is still in the early stages of development, and such an impact will not be immediate.

Click HERE to learn more about Human Tissue Bill and have your say on proceedings.

END_OF_DOCUMENT_TOKEN_TO_BE_REPLACED

The Health and Safety Authority (HSA) has launched a short, interactive on-line course on Chemical Safety in the Workplace. The 30-minute course is free and can be accessed through the Authority’s e-learning portal, http://hsalearning.ie. The course is aimed at employers and employees, including supervisors and health and safety representatives, in any sector where chemicals are used.

END_OF_DOCUMENT_TOKEN_TO_BE_REPLACED

BeSMART.ie online risk assessment tool has recently been extended to include embalming as a business type. This will assist our members in complying with their legal duty to have a workplace specific safety statement and written risk assessments in place.

END_OF_DOCUMENT_TOKEN_TO_BE_REPLACED 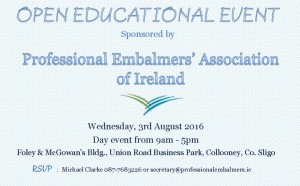 Members of the PEAI are extending this amazing opportunity to all funeral practitioners to learn and update their knowledge in the following topics.

Enlightening Client Families on Memorialization Options in a Decreasing Market

END_OF_DOCUMENT_TOKEN_TO_BE_REPLACED

We wish to inform all members that the Health Safety Authority is holding the ‘Use Safely Chemicals Seminar’ on the 25th of May 2016 to be held in the Radisson Blu Hotel and Spa, Lough Atalia Road, Galway. For details and registration please click on link

END_OF_DOCUMENT_TOKEN_TO_BE_REPLACED

On the 18th of May 2016, our association will be holding a special educational event to coincide with our annual general meeting.

The PEAI would like to extend an invitation to all funeral practitioners who wish to attend this educational event.

END_OF_DOCUMENT_TOKEN_TO_BE_REPLACED

This website uses cookies to improve your experience while you navigate through the website. Out of these, the cookies that are categorized as necessary are stored on your browser as they are essential for the working of basic functionalities of the website. We also use third-party cookies that help us analyze and understand how you use this website. These cookies will be stored in your browser only with your consent. You also have the option to opt-out of these cookies. But opting out of some of these cookies may affect your browsing experience.
Necessary Always Enabled

Any cookies that may not be particularly necessary for the website to function and is used specifically to collect user personal data via analytics, ads, other embedded contents are termed as non-necessary cookies. It is mandatory to procure user consent prior to running these cookies on your website.